In 2014, WWE teamed up with Mattel to create WWE Slam City, a short-form animation series featuring WWE Superstars in stop motion-style animation living and working in a WWE-themed city. At the time, I was leading development of a children’s centric WWE website and was tasked with turning that into the official site for WWE Slam City. Working closely with the developer, I coordinated the front and back-end design of the site. I managed and posted all content on the site including posting weekly episodes of WWE Slam City.

I also worked with a development team to create a web-based game entitled “WWE Slam City Launch” and worked with our internal design teams to create printable activities such as posters and coloring pages.

Although the site is now defunct, it won the 2014 W3 Gold Award for Outstanding Children’s Website. 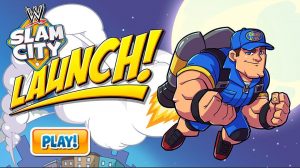