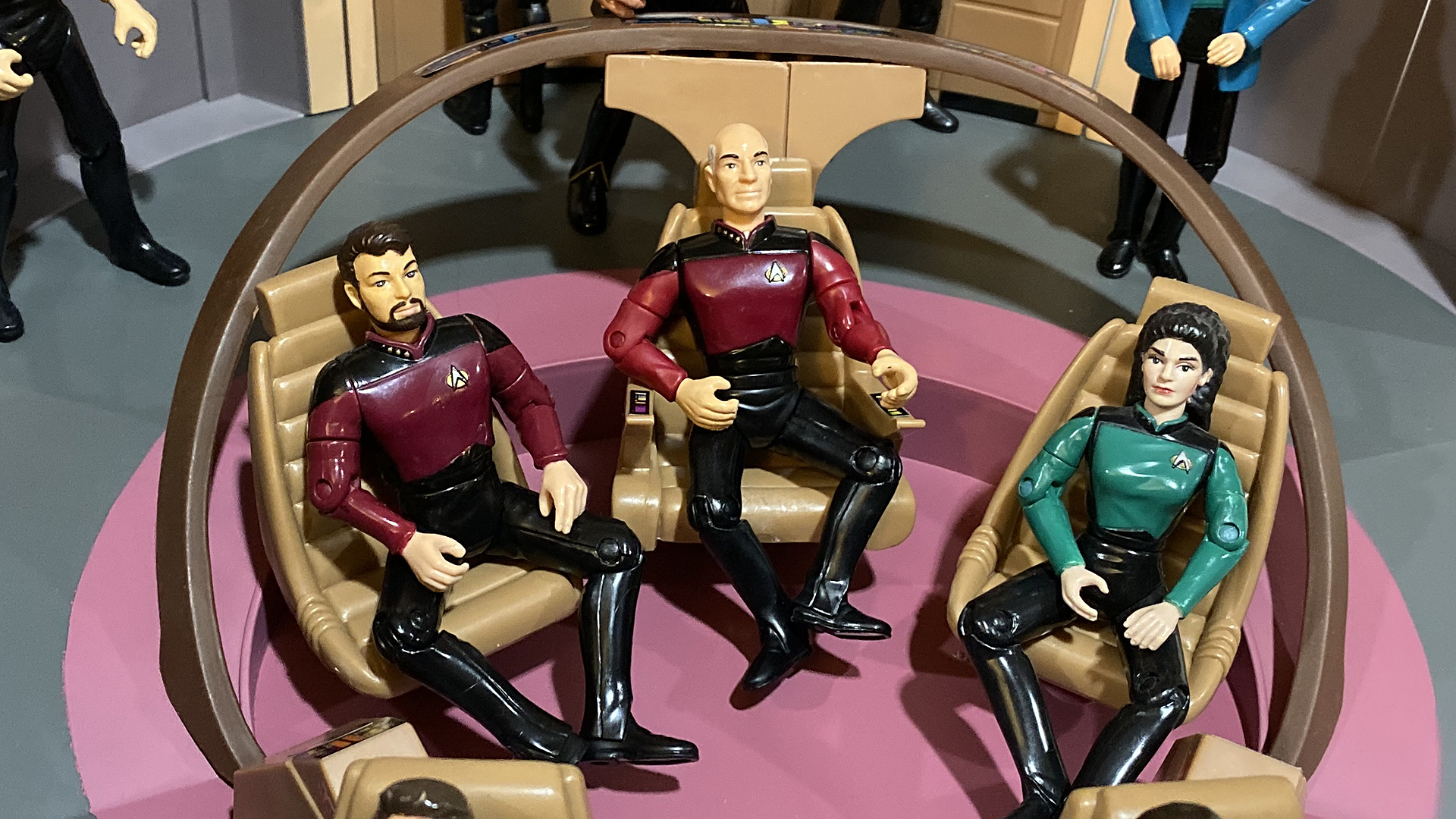 The 1980s and 1990s brought about a time of toy collecting and play that may never be captured again. Nearly every major franchise had a line of action figures and collectibles from various toymakers likes like Hasbro, Mattel, Kenner, Toy Biz and more. You could argue that X-Men, Batman and Ninja Turtles dominated the early-90s toy landscape, but there is one toy line that was near-perfect – Playmates Toys’ Star Trek line. With classic Ninja Turtles being revived every few years and classic Real Ghostbusters revival from Hasbro, I’ve got to wonder, as we’re in the midst of a massive Star Trek resurgence, who is going to bring back the most successful toy line of the franchise?

If you’ve seen the Star Trek episode of Netflix’ “The Toys That Made Us,” you know the history of licensed Star Trek products, action figures, accessories and more. The docu-series makes the point that the 1990s Playmates line was the most successful in the franchise’s history. It’s noted that the combination of timing, demand and accessibility to kids and adults is what made it a rousing success.

The Playmates line had hundreds of characters ranging from obscure one-offs to popular and regular characters. As the line grew and expanded beyond The Next Generation and the other TV shows, it started to include figures representing the Original Series and the movies. While there were some inconsistencies with articulation, the scale of the main 5 inch line remained consistent – which the exception of the First Contact figures – and was perfect for play and collectors.

However, it wasn’t just the action figures that really made the Playmates Star Trek line truly memorable. There were role-playing accessories that were screen-accurate, mini-figure playsets, screen-accurate starships, 12-inch collecto figures and a handful of playsets for the 5-inch figures that were, in a word, amazing. Playmates offered a transporter room, an engineering playset (with Star Trek Generations) and a couple of shuttlecrafts. However, the crown jewel was the Enterprise Bridge. Easily one of the best playsets ever created, it fully captures the very essence of the bridge of the Enterprise-D and can fit the full bridge crew and then some.

I could gush over this line of toys for days. I had a lot of them as a kid and I’ve still collected them as an adult. Once again, if you’ve seen “The Toys That Made Us” then you know the demise of the Playmates line eventually came about. The Netflix docu-series cites the store exclusives – specifically the 1701 series – that helped usher the end of the Playmates line. Because the line appealed to both kids and adult collectors, completing collections were a big draw. The 1701 series was limited to 1701 pieces (eventually increased), but the limitations led to incomplete sets, which in turn led to a loss of collectability and soon enough, the end of the line.

Of course, there is an argument to be made for franchise fatigue. Star Trek was firing on all cylinders in the late-1980s and 1990s, but by the time “Star Trek: Nemesis” – a poorly received, but not as bad in retrospect – film was released, the franchise was running on fumes. I have my own theories on what led to Star Trek’s hibernation, but that’s neither here nor there.

After Playmates, Art Asylum/Diamond Select took on the license and created excellent figures, props and ships that were geared more towards collectors.

In 2009, Playmates once again reacquired the Star Trek license for the J.J. Abrams-led film that gave birth to the Kelvin Timeline. When it was announced that Playmates had the license, I was beyond excited. I thought for sure we’d get a revival of the 90s line. At the time, a number of franchises had experienced successful resurgences based on anniversaries, new shows or new movies However, when the new line launched, to say I was massively disappointed by the offerings for the 2009 film is an understatement. I wasn’t the only one, fan response wasn’t great and the license was abandoned, a fact that left the build-a-bridge infamously incomplete.

In the years since, there hasn’t been a lot available in terms of Star Trek products. There have been Funko Pops and Eaglemoss makes excellent collector ships, but nothing compares to the mass appeal of the 90s Playmates line. McFarlane Toys recently acquired the license, but only a pair of figures comparable to the Art Asylum line has been released thus far.

While the 2009 film and its two sequels were generally well-received and reintroduced Star Trek to mainstream audiences, the real resurgence of the franchise is currently underway.

“Star Trek: Discovery” revived the franchise for the small screen in the streaming era. While it begins in the past, roughly 10 years before The Original Series, it feels fresh and new. It plays with established canon enough to fit its story, but ultimately respects everything that has come before. It’s taken the best parts of the Kelvin franchise and integrated them into the main timeline and updates the franchise to suit modern television sensibilities. Of course the second season brought us Anson Mount’s Christopher Pike – more on that in a moment – but Discovery has now become an important part of Star Trek.

The revival has also brought us back to The Next Generation with Star Trek: Picard. It gave viewers a different perspective on the franchise, one that has become more cynical – much like humanity – but it also pushed the franchise forward and opened up endless possibilities for the future.

“Lower Decks” has offered a wealth of new characters in a less-than-serious but 100% Trek animated series. And due to the overwhelming popularity of Anson Mount’s Pike, Ethan Peck’s Spock and Rebecca Romijn’s Number One in Discovery Season Two, a new series that will be “classic Star Trek,” “Strange New Worlds” is on the horizon. There are also rumors of more shows in the mix as well.

So what’s missing from this resurgence?

Eaglemoss has kept up to speed with their excellent ship models, Star Trek Online keeps up to speed with regular new content, novels continue to be produced and IDW Publishing continues to put out comics that tie-in to the franchise. However, with the exception of a few specialty items every now and again, there is no main mass market Star Trek toyline.

Sure, the first question you have to ask is simple. “Is there a market for this?”

That’s a very valid question, but I wouldn’t be writing this if I didn’t think the answer was “yes.”

I am an avid toy collector and I collect a range of toy lines, Marvel Legends, DC Multiverse, DC Collectibles, Mezco One:12, (of course) Playmates Star Trek … I’ve even got a couple Hot Toys.

Nowadays the toy market is aimed at collectors. We’re seeing a new line of G.I. Joes in the Marvel Legends style, a new series of Ghostbusters, including a revival of the Kenner Real Ghostbusters line. That’s where much of this comes from. In recent years, we’ve see toy lines revived to hit on people’s nostalgia and to give collectors the opportunity to have the toys they never did when they were younger. For me, that’s a big part of the mentality behind collecting. Masters of the Universe, Ninja Turtles and now Ghostbusters have all done it. The door is wide open for Star Trek.

There is one thing I notice about the most successful toy lines, they are consistent. The best examples are Marvel Legends and Star Wars. Marvel Legends specifically has been a line that has been consistent in scale and quality since they were first released by Toy Biz in 2002. Of course the quality has improved over the years, but the point is you can display the original figures with the latest releases and you’d never really know the difference.

The point here is that consistency matters. Some of the best-selling brands are Marvel, Star Wars and WWE and the common thread between them over the years is consistency. That same consistency is what made the Playmates Star Trek line such a smash hit.

The Playmates Star Trek toy line is one of the most perfect series of toys ever released. I’d rank them high with Super Powers or Justice League Unlimited. The scope of characters, consistency and affordability make them stand out. Even today, there is a huge secondary market for the Playmates figures on eBay, conventions and specialty stores, and they are mostly affordable.

Now imagine if Playmates – or whoever would have the license – took the tooling of the 1990s line and revived it with new characters from Discovery, both the Prime and Kelvin movies, Picard, Strange New Worlds and beyond. There’s also potential to re-release figures from the original line creating a seamless continuation of this fantastic line.

It sure seems like a no-brainer to me and something collectors would jump on and Star Trek fans deserve. Could some aspects of the original line change? Sure they could. There could be better leg articulation, the head sculpts could be more detailed – although the original head sculpts are far ahead of their time in capturing the likenesses of the actors.

The bottom line is that a revival of the Playmates toys, so that a new Michael Burnham or Captain Pike can fit right alongside your ripped shirt Commander Riker or Motion Picture Admiral Kirk would be a collector’s dream. For kids just discovering Star Trek, or parents introducing their kids to Star Trek, there’s no better way to share the love of the franchise.

Why stop at just figures? Bring back the accessories, the starships and even expand the playsets. A re-issue of the Enterprise-D bridge, the Enterprise-E bridge, Discovery, Voyager… the possibilities are endless. Many toy companies have adopted crowd-funding and pre-order services to meet and match demand. There’s no reason Playmates or any other company couldn’t do this with a little bit of basic digital infrastructure for pre-orders.

The evidence such a revival could be successful exists in the history of the franchise. It exists in the secondary market of these toys, the way other franchises are revived, and ultimately in this wild and exciting resurgence of Star Trek.

Personally, all of this has been my long-form way of saying I want an official Anson Mount Captain Pike Playmates figure. I want a Captain Riker from Picard. I want a Michael Burnham. I’m sure I’m not the only one.

The time to do it is now. So I hope Playmates, or McFarlane or whoever has the license looks at the history of Star Trek, the success of Playmates Toys in the 1990s and the affinity people have for that toy line and simply say “Hit it.”